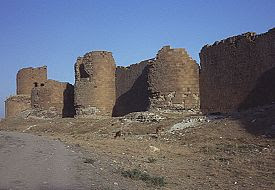 As the long period of gloom, faintly starred by calamitous victories, passed into the ninth century, the Arab oppression slowly lightened.  The Abbasid Empire was drawing to its fall.  While the Arabs were facing their own troubles, the Armenian nobility were founding principalities.  The Mamikonian family, it is true, died out in the middle of the ninth century without founding a kingdom.  Yet, because they had no wide territories, they served Armenia disinterestedly, and though of foreign origin could claim many of the national heroes of their adopted country:  Vasak, Mushegh, and Manuel, three generals of the Christian Arsacidae; Vardan, who died for the faith in the religious wars; Vahan the Wolf and Vahan Kamsarakan, who fought the Persians; David, Grigor, and Mushegh, rebels against Arab misrule.  The Arcruni and the Siwni, who had also defended Armenia against the Arabs, founded independent states in the tenth century.  The Arcruni established their kingdom (Vaspurakan) round the rocky citadel of Van, overlooking Lake Van (908).  Later, two different branches of their family founded the two states of the Reshtuni and the Antsevatsi.  The Siwni kingdom (Siunia) arose in the latter half of the century (970).  Many other principalities were also formed, each claiming independence, the largest and most important of them all being the kingdom of the Bagratuni.

Like the Mamikonians, the Bagratuni seem to have come from abroad.  According to Moses of Chorene, they were brought to Armenia from Judaea by Hratchea, son of Paroïr, in b.c. 600.  In the time of the Parthians, King Valarsaces gave to Bagarat the hereditary honour of placing the crown upon the head of the Armenian king, and for centuries afterwards Bagarat's family gave leaders to the Armenians.  Varaztirots Bagratuni was the last Marzpan of the Persian domination, and the third Curopalates of Armenia under the Byzantine Empire.  Ashot (Ashod) Bagratuni seized the government when the Arabs were trying to dislodge the Greeks in the middle of the seventh century, and foreshadowed the later policy of his family by his friendliness towards the Caliph, to whom he paid tribute.  He fell in battle, resisting the Greeks sent by Justinian II.  Smbat Bagratuni, made general of the forces by Justinian, favoured the Greeks.  Escaping from captivity in Damascus, it was he who had defeated the Arabs with the help of Leo the Isaurian, and governed the Armenians from the fortresses of Taïkh.  In the middle of the eighth century, another Ashot reverted to the policy of his namesake, and was allowed by Marwân, the friendly Ostikan, to rule Armenia as “Prince of Princes.”  In consequence he refused to rebel with other Armenian princes when the Arab tyranny was renewed, and for his loyalty was blinded by his compatriots.  Of his successors, some fought against the Arabs and some sought their friendship; Bagratuni princes took a leading part on both sides in the Armeno-Persian rebellions suppressed by the Arabs in the first half of the ninth century.

The Bagratuni were also wealthy.  Unlike the Mamikonians, they owned vast territories, and founded a strong principality in the country of Ararat.  Their wealth, their lands, and their history made them the most powerful of Armenian families and pointed out to them a future more memorable than their past.  Midway in the ninth century, the power of the Bagratuni was inherited by Prince Ashot.  The son of Smbat the Confessor, he refounded the ancient kingdom of Armenia and gave it a dynasty of two centuries' duration.  Under the rule of the Bagratuni kings Armenia passed through the most national phase of its history.  It was a conquered province before they rose to power, it became more European and less Armenian after their line was extinct.  Like Ashot himself, his descendants tried at first to control the whole of Armenia, but from 928 onwards they were obliged to content themselves with real dominion in their hereditary lands and moral supremacy over the other princes.  This second and more peaceful period of their rule was the very summer of Armenian civilisation. 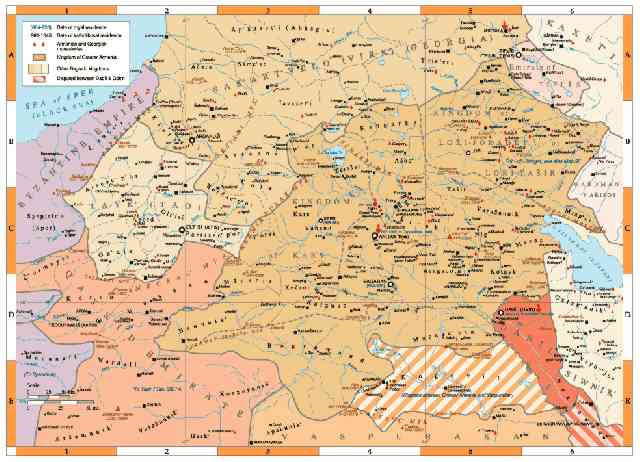 Ashot had come into a great inheritance.  In addition to the provinces of Ararat and Taïkh, he owned Gugarkh and Turuberan, large properties in higher Armenia, as well as the towns of Bagaran, Mush, Kolb, and Kars with all their territory.  He could put into the field an army of forty thousand men, and by giving his daughters in marriage to the princes of the Arcruni and the Siwni he made friends of two possible rivals.  For many years his chief desire was to pacify Armenia and to restore the wasted districts, and at the same time to earn the favour of the Caliphate.  In return, the Arabs called him “Prince of Princes” (859) and sent home their Armenian prisoners.  Two years later Ashot and his brother routed an army, double the size of their own, led into Armenia by Shahap, a Persian who was aiming at independence.  Ashot's politic loyalty to the Arabs finally moved the Caliph Mu‘tamid to make him King of Armenia (885−7), and at the same time he likewise received a crown and royal gifts from the Byzantine Emperor, Basil the Macedonian.  But Armenia was not even yet entirely freed from Arab control.  Tribute was paid to Baghdad not immediately but through the neighbouring Ostikan of Azerbâ’îjân, and the coronation of Armenian kings waited upon the approval of the Caliphs.

During his brief reign of five years, Ashot I revived many of the customs of the old Arsacid kingdom which had perished four and a half centuries earlier.  The crown, it seems, was handed down according to the principle of primogeniture.  The kings, though nearly always active soldiers themselves, do not appear to have held the supreme military command, which they usually entrusted to a “general of the forces,” an ancient office once hereditary in the Mamikonian family, but in later times often filled by a brother of the reigning king.  In Ashot's time, for instance, his brother Abas was generalissimo, and after Ashot's death was succeeded by a younger brother of the new king. 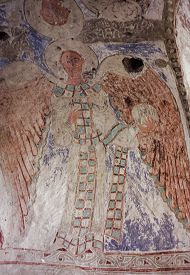 The Katholikos was, after the king, the most important person in Armenia.  He had been the only national representative of the Armenians during the period of anarchy when they had no king, and his office had been respected by the Persians and used by the Arabs as a medium of negotiation with the Armenian princes.  Under the Bagratid kings, the Katholikos nearly always worked with the monarchy, whose representatives it was his privilege to anoint.  He would press coronation upon a reluctant king, would mediate between kings and their rebellious subjects, would lay the king's needs before the Byzantine court, or would be entrusted with the keys of the Armenian capital in the king's absence.  Sometimes in supporting the monarchy he would oppose the people's will, especially in a later period, when, long after the fall of the Bagratuni dynasty, King and Katholikos worked together for religious union with Rome against the bitter hostility of their subjects.

Ashot made good use of every interval of peace by restoring the commerce, industry, and agriculture of his country, and by re-populating hundreds of towns and villages.  For the sake of peace he made alliances with most of the neighbouring kings and princes, and after travelling through his own estates and through Little Armenia, he went to Constantinople to see the Emperor Leo the Philosopher, himself reputedly an Armenian by descent.  The two monarchs signed a political and commercial treaty, and Ashot gave the Emperor an Armenian contingent to help him against the Bulgarians.

Ashot died on the journey home, and his body was carried to Bagaran, the old city of idols, and the seat of his new-formed power.  But long before his death, his country's peace, diligently cherished for a life-time, had been broken by the Armenians themselves.  One after another, various localities, including Vanand and Gugarkh, had revolted, and although Ashot had been able to restore order everywhere, such disturbances promised ill for the future.  The proud ambition of these Armenian princes had breathed a fitful life into a conquered province only to sap the vitality of an autonomous kingdom.