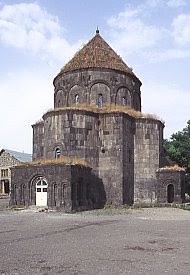 Two reigns of perpetual warfare were followed by nearly a century of comparative peace (928−1020).  Ashot's successors were content with more modest aims.  At home they confined their real rule to their own patrimony and exercised only a moral sway over the other Armenian States.  Abroad they sought the favour of the Arabs, rather than that of the Greeks.  In this way alone was it possible to secure a measure of peace.

Ashot II was succeeded by his brother Abas (928−951), who concluded a treaty with the Arabs of Dwin and exchanged Arab for Armenian prisoners.  He restored towns and villages and built churches.  But when he built the cathedral of Kars, he brought not peace but a sword to his countrymen.  Ber, King of the Abasgians (Abkhaz), wanted the cathedral to be consecrated according to Greek rites.  On the banks of the Kûr, Abas defeated him twice to cure him of error, and then blinded him for having looked on the building with impious eyes.

Ashot III (952−977) adopted a conciliatory policy.  When his rebellious brother Mushel founded a kingdom in Vanand with Kars for its capital (968), Ashot entered into friendly relations with him.  He earned the good will of Baghdad by defeating a rebel who had thrown Azarbâ’îjân and Mesopotamia into confusion.  Side by side with a prince of the Arcruni family he faced the Emperor John Tzimisces, who came eastward to fight the Arabs and who seemed to threaten Armenia by pitching his camp in Taron.  Baffled by the bold front of Ashot's army, eighty thousand strong, the Emperor demanded and received an Armenian contingent, and marched away from the frontier.

By such circumspect action, Ashot III gave peace to Armenia.  He reorganised the army and could put into the field a host of ninety thousand men.  Surpassing his predecessors in the building of pious foundations, he bestowed great revenues on convents, churches, hospitals, and almshouses.  He made Ani his capital and laid the foundations of its greatness.  He was known as Olormadz, the Pitiful, for he never sat down to meals without poor and impotent men about him. 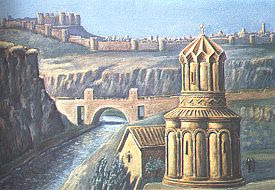 Ashot's son Smbat II (977−990) was a lover of peace and a great builder like his father.  But he was forced into war with his rebellious uncle Mushel, King of Vanand, and before his death he angered the Church by marrying his niece.

Under his brother and successor, Gagik I (990−1020), the Armenians enjoyed for a whole generation the strange experience of unbroken prosperity.  Gagik was strong enough to prevent foreigners from attacking him, and to gain the friendship of the other Armenian princes.  Free from war, he used all his time and energy to increase the moral and material welfare of his people.  He enriched the pious foundations that dated from the time of his brother and father, and appropriated great revenues to churches and ecclesiastics, taking part himself in religious ceremonies.  In his reign the civilisation of Armenia reached its height.  Flourishing in the unaccustomed air of peace, convents and schools were centres of light and learning; commercial towns such as Ani, Bitlis, Ardzen, and Nakhijevan, became wealthy marts for the merchandise of Persia, Arabia, and the Indies.  Agriculture shared in the general prosperity.  Goldsmiths, much influenced by Persian models, were hard at work, and coppersmiths made the plentiful copper of the country into objects of every description.  Enamelling flourished in neighbouring Georgia, but no Armenian enamel survives to tell whether the art was practised in Armenia itself.

Armenian culture was pre-eminently ecclesiastical.  Its literature did include chronicles and secular poems, but was overwhelmingly religious as a whole.  Armenian manuscripts, famous alike for their antiquity, their beauty, and their importance in the history of writing, are nearly all ecclesiastical.  Most interesting of all in many ways (especially for the comparison of text and variant readings) are the numerous copies of the Gospels.  The Moscow manuscript (887) is the earliest Armenian manuscript actually dated, and two very beautiful Gospels of a later date are those of Queen Melkê and of Trebizond.  A collection of theological and other texts executed between 971 and 981 is their earliest manuscript written on paper.  Other important writings were dogmatic works, commentaries, and sharakans or sacred songs composed in honour of church festivals.  Armenian art, again, was mainly ecclesiastical, and survives, on the one hand in the illuminations and miniatures which adorn the sacred texts, and, on the other, in the ruined churches and convents which still cover the face of the country.  Architecture was military as well as ecclesiastical, but it is hard not to believe that the people of Ani were prouder of their galaxy of churches than they were of their fortress, their walls, and their towers. 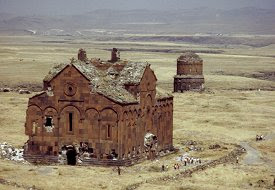 In the tenth century, especially after a branch of the Bagratuni had founded an independent State in Vanand (968), the intellectual focus of Armenia seems to have been Kars, with its crown of young Armenian students who came there to study philosophy, belles-lettres, and theology.  But the true centre and most splendid proof of Armenian civilisation was Ani, city of forty keys and a thousand and one churches.  In the eighth century no more than a village, it slowly grew larger and more populous.  Ashot I and Ashot III were crowned at Ani, and there Ashot III established the throne of the Bagratuni dynasty.  He defended the city with a fortress, and his queen enriched it with two fine convents, but the most splendid buildings were added by Smbat II, who also fortified Ani on the north with a double line of walls and towers and a great ditch of stone.  The citadel was defended on the east and south by the river Akhurian, and on the west by the Valley of Flowers.  Among the magnificent palaces and temples, richly adorned with mosaics and inscriptions, stood the cathedral, masterpiece of the famous architect Trdat (Tiridates), built on Persian and Byzantine lines.

This mixture of architectural styles is typical of the national art of Armenia, which betrays a subtle mingling of Persian, Arab, and Byzantine influences.  The churches of Sevan, of Digor, and Keghard near Erivan, even the Armenian church of Paris in the Rue Jean-Goujon, still symbolise the desperate battle the Armenians had to fight against the foreigner, and still suggest that the only way of maintaining the unequal struggle was to turn the encroaching elements to the service of the Armenian Church, dearest and most inviolable stronghold of Armenian nationality.

Under Gagik I that nationality seemed safe.  His reign proved Armenia's capacity for quick recovery, and promised the country a fair future if peace could be kept.  But the universal grief at Gagik's death was unconscious mourning for the end of prosperity.  It presaged the slow declension of Armenia from national pride to servitude, and the gradual passing of the royal house from kingly power to exile and extinction.