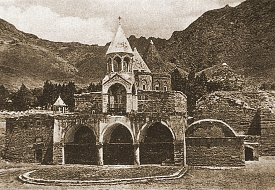 Two generations of misfortune (1020−1079) opened with civil war.  Gagik had left two sons.  His successor John-Smbat (1020-1040), timid and effeminate, was attacked and defeated by his younger and more militant brother Ashot, who was helped by Senekherim Arcruni, King of Vaspurakan (Van).  Peace was concluded through the mediation of the Katholikos Petros Getadartz and Giorgi, King of the Georgians, but only by a division of territory.  John-Smbat kept Ani and its dependencies, while Ashot took the part of the kingdom next to Persia and Georgia (Iberia).  On the death of either brother the country was to be re-united under the survivor.

But Ashot was discontented.  He roused the King of Georgia to attack and imprison John-Smbat, who escaped only by yielding three fortresses to Giorgi.  Still unsatisfied, Ashot feigned mortal illness and begged his brother to pay him a last visit.  Once by Ashot's bedside John-Smbat saw the trap and begged for his life.  Ashot, deceitful to the end, freed him merely to hand him over to Prince Apirat, who promised to kill him at a secret spot.  But, visited by sudden remorse, Apirat restored the king to Ani and his throne, and fled himself to Abû’l-Aswâr, governor of Dwin, to escape the wrath of Ashot.

While Ashot schemed against his brother, Armenia was threatened on both sides by different enemies, one old, the other new.  The new assailants were the Seljûq Turks, led against Vaspurakan at the opening of John-Smbat's reign by Tughril Beg, whose precursor Hasan had already wasted Mesopotamia.  When they had overcome the resistance of Vaspurakan, they advanced into John-Smbat's territory.  At the beginning of his reign John-Smbat had had an army of 60,000, but the Armenian generalissimo, Vasak Pahlavuni, had to meet the Turks with a bare five hundred men.  Climbing Mount Serkevil to rest, he died there, whether by his own hand, or by treason, or by a rock falling from the mountain while he prayed, is unknown.  Meanwhile, Tughril Beg left Armenia for the time and conquered the whole of Persia.

On the west, Armenia was threatened once again by the Byzantine Empire.  The Turkish advance, instead of inducing the Greeks to help Armenia, revived in them their old ambition of conquest, with fatal results not only to the Armenians but to themselves.  During the reign of John-Smbat this ambition was twice fed by Armenian policy.  Conquered and then left by Tughril Beg, Senekherim of Vaspurakan gave up his kingdom to Basil II (1021) in exchange for the town of Sebastea (Sîwâs) rather than wait to offer a second vain resistance to the Turks on their inevitable return.  Two years later Basil entered Georgia to repress a revolt in which John-Smbat had been secretly implicated.  In fear of the Emperor's wrath John-Smbat violated the treaty he had made with his brother, and through the agency of the Katholikos Petros Getadartz he gave in writing a promise that after his own death Basil should inherit Ani.  Basil was well pleased.  But some years later his successor Constantine VIII summoned to his death-bed an Armenian priest named Kirakos, and handed him the inequitable document, saying:  “Bear this letter to thy king and tell him from me that like other mortals I find myself on the threshold of Eternity, and I would not extort the possession of another.  Let him take back his kingdom and give it to his sons.”  The mischief might have ended here but for the treachery of the priest, who kept the letter in his own possession and finally sold it for a large sum to Michael IV (1034).  Much as his dishonesty cost the Emperor, it was to cost Armenia more. 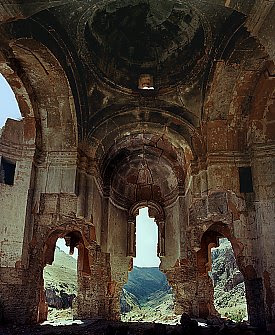 As soon as John-Smbat was dead, Michael sent an embassy to claim Ani and its dependencies.  His chance of success was good, because Ani was divided by two factions.  One, led by the generalissimo Vahram Pahlavuni, wished to crown Gagik, the fourteen-year-old nephew and heir of John-Smbat; the other intended to give the crown to Vest Sarkis Siwni, the regent, or failing him to the Emperor Michael.  For the moment, party differences were sunk in unanimous denial of Byzantine claims, but Vest Sarkis destroyed this short-lived amity by seizing the State treasure and several strongholds.  Vahram's party won a fairer renown by defeating the Greeks, who were sent by the Emperor to take by force what his embassy had failed to win by persuasion.  One after another three Greek armies invaded Armenia; each spread desolation far and wide without conquering Ani.  Michael then sent a fourth army to besiege Ani while the King of the Albanians (Aluans) invaded the north-east province of Armenia on behalf of the Greeks.  Vahram broke up the invading army by a bold attack.  The Greeks, terrified by the fury of the Armenians, fled in disorder, leaving twenty thousand dead and wounded beneath the walls of the town.  This victory enabled Vahram to crown Gagik II (1042-1046).  With a mere handful of men the boy-king recovered the State treasure and the citadel of Ani from Vest Sarkis, whom he cast into prison.  Unhindered for the moment by Greek interference or Armenian treachery, Gagik drove out the Turks and began to restore order in the country.  But unfortunately for himself and for his people, he was generous enough to forgive Vest Sarkis and to raise him to honour.  Posing as the king's friend, this traitor worked to alienate the Armenian princes from Gagik and to encourage the hostile intention of Constantine Monomachus, successor to Michael V.

Constantine copied the Armenian policy of Michael.  Failing to secure Ani by negotiation, he sent an army to seize it.  Gagik defeated the Greeks and forced them to retire.  Like Michael, Constantine then sent a larger army, and at the same time urged Abû’l-Aswâr, governor of Dwin, to harass the Armenians on the east.  But Gagik disarmed Abû’l-Aswâr by gifts, and after a short battle put to flight the confident Greeks.

Still Constantine would not give up hope.  Where peace and war had failed, trickery might succeed.  Inspired by Vest Sarkis, he asked Gagik to come to Constantinople to sign a treaty of perpetual peace, swearing on the cross and the gospels in the presence of Gagik's delegate that he would be true to his word.  Unwilling to go himself, and discouraged by the Vahramians, the king ultimately yielded to the evil counsel of Vest Sarkis and passed out of Armenia to his ruin.  Before he had spent many days in Constantinople, the Emperor demanded Ani of him, and, when he refused it, imprisoned him on an island in the Bosphorus.

When the Armenians heard of the disaster, there was much division among them.  Some wanted to deliver Ani to David Anholin of Albania, others to Bagarat, King of Georgia and Abasgia, but the Katholikos Petros, to whom Gagik had entrusted the keys, informed the Emperor that Ani should be his for a consideration.  Once assured of a good price for his shameful merchandise, Petros sent the forty keys of the bartered city to Constantine.

Gagik rebelled against the accomplished fact, but finally abdicated his throne, receiving in exchange the town of Bizou in Cappadocia.  Here he married the daughter of David, King of Sebastea, and led the wandering life of an exile.  After many years, he learnt one day that the Metropolitan, Mark of Caesarea, had named his dog Armên in mockery of the Armenians.  Gagik could not stomach the insult, steep it as he must in the bitterness of exile, in hatred of a rival Church, in contempt for a people he had never encountered but as conqueror until they overcame him by guile.  To avenge the honour of his country's name, he caused the dog and the ecclesiastic to be tied up together in a sack, and had the animal beaten until it bit its master to death.  For this crime against their metropolitan, three Greek brothers seized Gagik by treachery and hanged him in the castle of Cyzistra (1079).  He left two sons and a grandson, but they did not long survive him.  When the last of them had died in prison, the Bagratuni line was extinct. During the exile of their king, the Armenians fell a prey to Greek and Turk.  At first, not knowing of his abdication, they resisted the Greeks and dispersed the army sent under the command of the eunuch Paracamus to take possession of Ani.  But on hearing that Gagik was never again to enter the country, the Armenians lost all heart, and allowed Paracamus to possess the city.  Once masters of Armenia, the Greeks committed atrocious cruelties.  They exiled or poisoned the princes, replaced Armenian troops by Greek garrisons, and worked for the utter destruction of the country.

But they had reckoned without the Turk.  Learning of Armenia's weakness, Tughril Beg returned, and spread ruin and desolation far and wide for several years.  He sacked the fortified town of Smbataberd and tortured the inhabitants.  The rich commercial town of Ardzen shared the same fate (1049).  The Greeks at last determined to make an end of his savagery.  Together with Liparid, King of Georgia, their general Comnenus offered battle to the Turks near Bayber.  But owing to disagreement among the Christians, the Turks were victorious and carried the King of Georgia into captivity.  With no one now to oppose him, Tughril overran most of Armenia except Ani.  Vanand resisted in vain, but their failure in the siege of Manzikert forced the Turks to retire.  Tughril fell back, only to wreak his vengeance upon Ardskê.  His death, like that of the Arab Afshîn long before, brought no relief to Armenia, for like Afshîn, he left a brother, Alp Arslân, to complete his work of destruction.  Alp Arslân besieged Ani unsuccessfully for a time, but finally overcame its resistance and sacked the city with unimaginable fury.  The river Akhurian ran red with blood; palaces and temples were set on fire and covered thousands of corpses with their ruins (1064).  The Turks then invited Vanand to submit.  Gagik, the king, feigned friendship and made an alliance with Alp Arslân.  But like Senekherim of Van before him, he gave his kingdom to the Eastern Empire in exchange for a stronghold farther west.  In 1065 he transported his family to the castle of Dzmndav in Little Armenia.  The Greeks, however, could not save Vanand from the Turks, who pushed their conquests as far as Little Armenia.  Kars, Karin, Bayber, Sebastea, and Caesarea had submitted to Alp Arslân, when the Emperor Romanus Diogenes opposed him at Manzikert in 1071.  The Greeks were defeated, and the Turks led the Emperor into captivity.

By the end of the eleventh century not a vestige remained of Byzantine dominion over Armenia.  The Greeks saw too late the fatal consequences of their selfish hostility towards a country which on south and east might have served them as a rampart against their most dangerous foe.