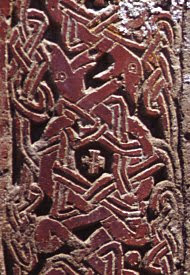 Under Smbat I (892−914) the lesser princes did more mischief than under his father Ashot because they made common cause with the Arabs of Azerbâ’îjân, who hated Armenia.  For more than twenty years Smbat held his kingdom against the persistent attacks, now separate, now connected, of the Ostikans of Azerbâ’îjân and of the Armenian princes, and for more than a generation he and his son looked perforce to the Greeks as their only source of external help.

As soon as Smbat had defeated his uncle Abas, who had tried to seize the throne in the first year of his reign, he turned to face Afshîn, Ostikan of Azerbâ’îjân.  Afshîn protested against the renewal of the Greco-Armenian alliance and twice invaded Armenia.  On the first occasion Smbat not only forced the Arabs to retire by a display of his strength, but made conquests at their expense.  He seized Dwin, the capital of the Arab emirs, and sent the Musulman chiefs captive to the Emperor Leo (894).  A year later Dwin was almost entirely destroyed by an earthquake.  The second time the Arabs invaded Armenia, Smbat, though taken by surprise, cut their army to pieces at the foot of Mount Aragatz (or Alagöz).  Afshîn then provoked rebellion among the Armenian princes, but without seriously weakening Smbat.  At last, through Armenian treachery, Smbat was defeated by Ahmad, Ostikan of Mesopotamia, who had invaded the province of Taron.  Afshîn took advantage of this reverse to invade Armenia for the third time.  Smbat retired to Taïkh, but Kars, the refuge of the queen, capitulated to Afshîn, who took Smbat's son as hostage and his daughter as wife.  Not long after, Afshîn died, and the hostages were given back (901).  Smbat took this opportunity to obtain from the Caliph both exemption from the authority of the Ostikan of Azerbâ’îjân and also permission to pay the annual tribute direct to Baghdad (902).

Afshîn's feud with Armenia was renewed by his brother Yûsuf.  Urging that the separation of Armenia and Azerbâ’îjân gave dangerous liberty to the Armenians, he invaded the country.  Smbat's troops frightened him into retreat before he had struck a blow, but he soon obtained help from some Armenian princes who were restive under heavy taxation.  Constrained to retire into the “Blue Fortress” with a handful of men, Smbat assaulted the Muslim and Christian besiegers with great success, and after withstanding a year's siege he capitulated only on receiving a promise that the lives of the garrison should be spared (913).  Yûsuf broke his promise.  He tortured Smbat for a year, and finally put him to death (914).  The Armenian princes retired into fortresses, and Armenia fell once more under the Arab yoke.  For several years Yûsuf sent fresh troops into Armenia and organised the devastation of the country from his headquarters at Dwin.  No crops were sown, and a terrible famine resulted.  It is reported that parents even sold their children to escape death and that some ate human flesh (918).

But the triumph of Yûsuf was short.  In the first year of the Arab occupation, Smbat's son, Ashot II, surnamed Erkath, the Iron, had already avenged his father's death by routing the invaders and reconquering the fortresses they held.  In 915 the Armenian princes had issued from their strongholds to declare him king.  Several years later he visited Byzantium, where the Katholikos had interested the court in the troubles of Armenia, and returned home with a force of Greek soldiers.  His reign was one of incessant struggle against the Arabs and the Armenian princes (915-928).

To thwart the new-born power of Armenia, Yûsuf crowned a rival king and provoked a fierce civil war, which was finally ended through the mediation of John, the Katholikos.  Many other internal revolts followed, but Ashot suppressed them all, and Yûsuf turned aside to attack the peaceful kingdom of Van.  Here, too, he was unsuccessful, but he appointed a new Ostikan of Armenia.  The purpose of this new Ostikan and of his successor Bêshir was to capture the Armenian king and the Katholikos.  But Ashot retired to the island of Sevan, and built ten large boats.  When Bêshir marched against him with a strong army, he manned each boat with seven skilled archers and sent them against the enemy.  Every Armenian arrow found its mark, the Arabs took to flight, and were pursued with slaughter as far as Dwin by Prince Gêorg Marzpetuni, Ashot's faithful supporter.  After this epic resistance, Ashot left Sevan in triumph, and took the title “King of Kings of Armenia” in token of his superiority to the other Armenian princes.  He died in 928.