Lying across the chief meeting-place of Europe and Asia, Armenia suffered immeasurably more from the conflict of two civilisations than it profited by their exchange of goods and ideas.  If the West penetrated the East under pressure from Rome, Byzantium, or crusading Europe, if the East moved westwards, under Persian, Arab, Mongol, or Turk, the roads used were too often the roads of Armenia.

This was not all.  East and West claimed and fought for control or possession of the country.  Divided bodily between Rome and Persia in pre-Christian times, an apple of discord between Persia and the Byzantine Empire during the early part of the Middle Ages, Armenia for the rest of its national history was alternately the prey of Eastern and Western peoples.  When the Armenian kingdom was strong enough to choose its own friends, it turned sometimes to the East, sometimes to the West.  It drew its culture from both.  But, belonging wholly neither to West nor to East, it suffered consistently at the hands of each in turn and of both together.

The stubborn pride of the Armenians in their national Church prevented them from uniting permanently either with Christendom or with Islâm.  Though driven by eastern pressure as far west as Cilicia, where it was in touch with the Crusaders, Armenia never held more than a doubtful place in the state-system of medieval Europe.  Sooner than sink their identity in Greek or Roman Church, the Armenians more than once chose the friendship of infidels.  On the other hand, whether as neighbours or as enemies, as allies or as conquerors, the races of the East could never turn the Armenians from their faith.  When Armenia ceased to exist as a State, its people kept alive their nationality in their Church.  As with the Jews, their ecclesiastical obstinacy was at once their danger and their strength: it left them friendless, but it enabled them to survive political extinction.

Isolated by religion, Armenia was also perpetually divided against itself by its rival princes.  Like the Church, the numerous princely houses both preserved and weakened their country.  They prevented the foundation of a unified national State.  But a large Power stretching perhaps from Cappadocia to the Caspian borders, and disabled by ill-defined frontiers, could never have outfaced the hostility of Europe and Asia.  A collection of small principalities, grouped round rocky strongholds difficult of access, had always, even after wholesale conquest, a latent faculty of recovery in the energy of its powerful families.  The Arabs could have destroyed a single royal line, but, slaughter as they might, Armenia was never leaderless: they could not exterminate its nobility.  The political history of Armenia, especially during the first half of the Middle Ages, is a history of great families.  And this helps to explain the puzzling movement of Armenian boundaries — a movement due not only to pressure from outside, but also to the short-lived uprising, first of one prince, then of another, amidst the ruin, widespread and repeated, of his country. 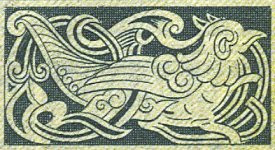 During the triumph of Rome and for many generations of Rome's decline Armenia was ruled by a national dynasty related to the Arsacidae, kings of Parthia (b.c. 149 − a.d. 428).  The country had been for many years a victim to the wars and diplomacy of Persia and Rome when in a.d. 386−7 it was partitioned by Sapor III and the Emperor Theodosius.  From 387 to 428 the Arsacid kings of Armenia were vassals of Persia, while the westernmost part of their kingdom was incorporated in the Roman Empire and ruled by a count.

The history of the thousand years that followed (428−1473) is sketched in this chapter.  {Note: except for consideration of an aftermath of the medieval period, in the more detailed sketch below we end soon after the start of the twelfth century – Ed.}  It may be divided into five distinct periods.  First came long years of anarchy, during which Armenia had no independent existence but was the prey of Persians, Greeks, and Arabs (428−885).  Four and a half centuries of foreign domination were then succeeded by nearly two centuries of autonomy.  During this second period Armenia was ruled from Transcaucasia by the national dynasty of the Bagratuni.  After 1046, when the Bagratid kingdom was conquered by the Greeks, who were soon dispossessed by the Turks, Greater Armenia never recovered its political life.

Meanwhile the third period of Armenia's medieval history had opened in Asia Minor, where a new Armenian State was founded in Cilicia by Prince Ruben, a kinsman of the Bagratuni.  From 1080−1340 Rubenian and Hethumian princes ruled Armeno-Cilicia, first as lords or barons (1080−1198), then as kings (1198−1342).  During this period the Armenians engaged in a successful struggle with the Greeks, and in a prolonged and losing contest with the Seljûqs and Mamlûks.  Throughout these years the relations between the Armenian rulers and the Latin kingdoms of Syria were so close that up to a point the history of Armeno-Cilicia may be considered merely as an episode in the history of the Crusades.  This view is strengthened by the events of the fourth period (1342−1373), during which Cilicia was ruled by the crusading family of the Lusignans.  When the Lusignan dynasty was overthrown by the Mamlûks in 1375, the Armenians lost their political existence once more.  In the fifth and last period of their medieval history (1375−1473), they suffered the horrors of a Tartar invasion under Tamerlane and finally passed under the yoke of the Ottoman Turks.