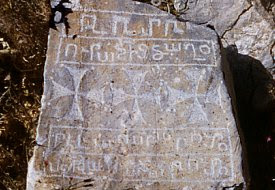 When Ardashes, the last Arsacid vassal-king, was deposed in 428, Armenia was governed directly by the Persians, who already partly controlled the country.  No strict chronology has yet been fixed for the centuries of anarchy which ensued (428−885), but it appears that Persian rule lasted for about two centuries (428−633).  Byzantine rule followed, spreading eastward from Roman Armenia, and after two generations (633−693) the Arabs replaced the Greeks and held the Armenians in subjection until 862.

In this long period of foreign rule, the Armenians invariably found a change of masters a change for the worse.  The Persians ruled the country th{r}ough a succession of Marzpans, or military commanders of the frontiers, who also had to keep order and to collect revenue.  With a strong guard under their own command, they did not destroy the old national militia nor take away the privileges of the nobility, and at first they allowed full liberty to the Katholikos and his bishops.  As long as the Persians governed with such tolerance, they might fairly hope to fuse the Armenian nation with their own.  But a change of religious policy under Yezdegerd II and Piroz roused the Armenians to defend their faith in a serious of religious wars lasting until the end of the sixth century, during which Vardan with his 1036 companions perished for the Christian faith in the terrible battle of Avaraïr (454).  But, whether defeated or victorious, the Armenians never exchanged their Christianity for Zoroastrianism.

On the whole, the Marzpans ruled Armenia as well as they could.  In spite of the religious persecution and of a dispute about the Council of Chalcedon between the Armenians and their fellow-Christians in Georgia, the Armenian Church more than held its ground, and ruined churches and monasteries were restored or rebuilt towards the opening of the seventh century.  Of the later Marzpans some bore Armenian names.  The last of them belonged to the Bagratuni family which was destined to sustain the national existence of Armenia for many generations against untold odds.  But this gleam of hope was extinguished by the fall of the Persian Empire before the Arabs.  For when they conquered Persia, Armenia turned to Byzantium, and was ruled for sixty years by officials who received the rank of Curopalates and were appointed by the Emperor (633−693).  The Curopalates, it appears, was entrusted with the civil administration of the country, while the military command was held by an Armenian General of the Forces.

Though the Curopalates, too, seems to have been always Armenian, the despotic yoke of the Greeks was even harder to bear than the burden of religious wars imposed by the Persians.  If the Persians had tried to make the Armenians worship the Sacred Fire, the Greeks were equally bent on forcing them to renounce the Eutychian heresy.  As usual, the Armenians refused to yield.  The Emperor Constantine came himself to Armenia in 647, but his visit did nothing to strengthen Byzantine authority.  The advance of the Arabs, who had begun to invade Armenia ten years earlier under ‘Abd-ar-Rahîm, made stable government impossible, for, sooner than merge themselves in the Greek Church, the Armenians sought Muslim protection.  But the Arabs exacted so heavy a tribute that Armenia turned again to the Eastern Empire.  As a result, the Armenians suffered equally from Greeks and Arabs.  When they paid tribute to the Arabs, the Greeks invaded and devastated their land.  When they turned to the Greeks, the Arabs punished their success and failure alike by invasion and rapine.  Finally, at the close of the seventh century, the Armenian people submitted absolutely to the Caliphate.  The Curopalates had fled, the General of the Forces and the Patriarch (Katholikos) Sahak IV were prisoners in Damascus, and some of the Armenian princes had been tortured and put to death. 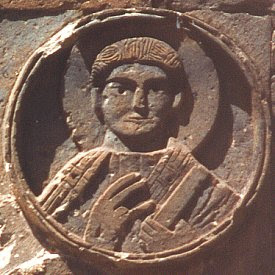 A period of unqualified tyranny followed.  The Arabs intended to rivet the chains of abject submission upon Armenia, and to extort from its helplessness the greatest possible amount of revenue.  Ostikans, or governors, foreigners almost without exception, ruled the country for Baghdad.  These officials commanded an army, and were supposed to collect the taxes and to keep the people submissive.  They loaded Armenia with heavy imposts, and tried to destroy the princely families by imprisoning and killing their men and confiscating their possessions.  Under such treatment the Armenians were occasionally cowed but usually rebellious.  Their national existence, manifest in rebellion, was upheld by the princes.  First one, then another, revolted against the Muslims, made overtures to the enemies of Baghdad, and aspired to re-found the kingdom of Armenia.

Shortly after the Arab conquest, the Armenians turned once more to their old masters, the Greeks.  With the help of Leo the Isaurian, Smbat (Sempad) Bagratuni defeated the Arabs, and was commissioned to rule Armenia by the Emperor.  But after a severe struggle the Muslims regained their dominion, and sent the Arab commander Qâsim to punish the Armenians (704).  He carried out his task with oriental ferocity.  He set fire to the church of Nakhijevan, into which he had driven the princes and nobles, and then pillaged the country and sent many of the people into captivity.

These savage reprisals were typical of Arab misrule for the next forty years, and after a peaceful interval during which a friendly Ostikan, Marwân, entrusted the government of Armenia to Ashot Bagratuni, the reign of terror started afresh (758).  But, in defiance of extortion and cruelty, insurrection followed insurrection.  Local revolts, led now by one prince, now by another, broke out.  On one occasion Mushegh Mamikonian drove the Ostikan out of Dwin, but the Armenians paid dear for their success.  The Arabs marched against them 30,000 strong; Mushegh fell in battle, and the other princes fled into strongholds (780).  Though in 786, when Hârûn ar-Rashîd was Caliph, the country was for the time subdued, alliances between Persian and Armenian princes twice ripened into open rebellion in the first half of the ninth century.  The Arabs punished the second of these unsuccessful rebellions by wholesale pillage and by torture, captivity, and death (c. 850).